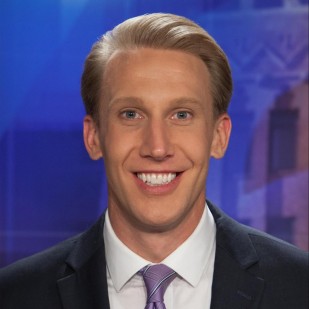 After two years of fun and adventures in the field, I am beyond thrilled to join the FOX6 WakeUp anchor team. It’s a special show, and promises to be the most entertaining and informative way to get your morning started.

I joined FOX6 in 2016 as the Roving Reporter for WakeUp. This role included jumping off trampolines, dancing as the Nutcracker, eating all kinds of food at 7 a.m. and any other activity that would help show off the wonderful festivals, businesses and events around southeast Wisconsin.

I checked off bucket list items by going skydiving and flying with the U.S. Air Force Thunderbirds, and was awarded an Emmy for our series of reports with the U.S. Navy aboard the USS Dwight D. Eisenhower.

Before all that, I took a circuitous route to Milwaukee. After growing up in suburban Maryland, I first landed in the Midwest as an undergrad at Northwestern — majoring in journalism but specializing in Ultimate Frisbee (and meeting my wonderful wife, Kim, along the way).

From there, it was off on a six-year journey as a sports anchor and reporter. I covered minor league baseball, including the debuts of Stephen Strasburg and Bryce Harper, at Blue Ridge Cable-11 (deep in the heart of Pennsylvania’s Amish country). Then I immersed myself in the ACC, following Virginia Tech and UVa with the great team at WDBJ7 in Roanoke, Virginia (with a healthy dose of NASCAR on the side). And finally, I spent three years under the shadow of the Golden Dome, reporting on all things Notre Dame as the weekend sports anchor at WSBT.

And despite some solid work at those various stops, it was the one time I dressed up as the Cat in the Hat to read to kids (okay, second time — the first was a starring role in Seussical the Musical back in high school) that caught the eye of the folks here at FOX6.

All of which is to say: I’m up for whatever this area has to offer. With interests in the arts, the outdoors and food — definitely food — let me know what I should check out around town. If you know of a cool event, a fun activity or a way for me to make a fool of myself on live TV, I’m all ears!