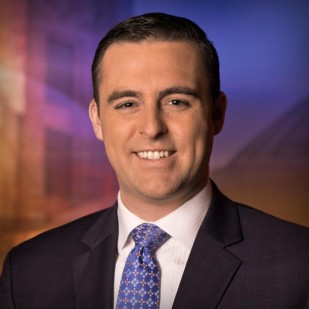 It is a dream to be able to tell the stories of Milwaukee and southeast Wisconsin. Since joining the Fox 6 news team in April of 2011, I have traveled across state and the country as an anchor/reporter for Wisconsin’s largest newsroom.

I am proud to call Milwaukee’s east side my home. My journey here brought me out of the woods of Connecticut, and through some of our country’s largest farm fields in Illinois before finding a home in the brew city!

I grew up in northwest Connecticut, and graduated from Quinnipiac University (GO BOBCATS!). A desire to be a professional storyteller helped me land my first job at ABC affiliate WICS in Springfield, Illinois. I was promoted and sent to sister station WICD in Champaign, Illinois where I met my wife. At the the time she was a reporter for the competition. I’m happy to say Ashley Sears and I found a way to be on the same team when we both moved to Milwaukee to work at FOX6! We enjoy working together a lot better than against each other.

Here in Milwaukee, I have anchored and reported on every newscast from morning to night. Currently I can be found anchoring weekend evening newscasts and reporting for FOX6 news at nine and ten throughout the week. In my time here I’ve covered some of Wisconsin’s biggest stories from the Sikh Temple and Azana Salon shootings to the unrest in Sherman Park in 2016. I’ve walked with Brett Favre during his return to Lambeau Field and helped push cars stuck in the snow during several Wisconsin winters.
I’ve been sent across the country where I’ve seen the destruction of an F-5 tornado in Oklahoma and the heartbreak left behind following the Pulse nightclub shooting in Orlando. In Dallas, I saw the resilience of officers who had to head back to work after five of their coworkers were killed, and have stood feet away from Air Force One for two different presidents.

My work has received recognition from the National Academy of Television Arts and Sciences, Midwest Broadcast Journalists Association, Wisconsin Broadcasters Association, and the Milwaukee Press Club.

In Milwaukee, you can often find Ashley and me jogging along the lakefront or attending one of the million festivals in our great home city. In 2016, I started a goofy boat blog to share pictures of Milwaukee’s vibrant shipping industry (http://www.bigboatsmke.com) I am on a lifetime journey to sample as much Mexican food as I can find. I am always looking for story ideas or recommendations for my next adventure. Feel free to reach out Ben.Handelman@fox6now.com. Let’s connect on Facebook, Twitter, and Instagram.